Finding bugs in systems through formalization

Welcome to a first post in English! Today’s post is about how creating a formal specification for (parts of) a system can help find real-world bugs. What initially triggered this post was that I watched Hillel Wayne's Strange Loop talk "Tackling Concurrency Bugs with TLAplus". Having dealt with a concurrency bug at work the week before, I thought it would be the perfect opportunity to learn some TLA+ and to verify the existence of the bug with TLA+. That turned out to work so well that it was worth writing a blog post about it, hence here we are!

Overview of the problem at hand

The system in question is a system that processes various kinds of jobs. Processing one job involves executing different jobs, possibly in parallel. Each processing step publishes status updates. A supervisor, called processing handler, supervises the processing. Once the processing of all mandatory steps has finished, some additional action is triggered, for example updating some metric or informing other parts of the system about the completed processing. 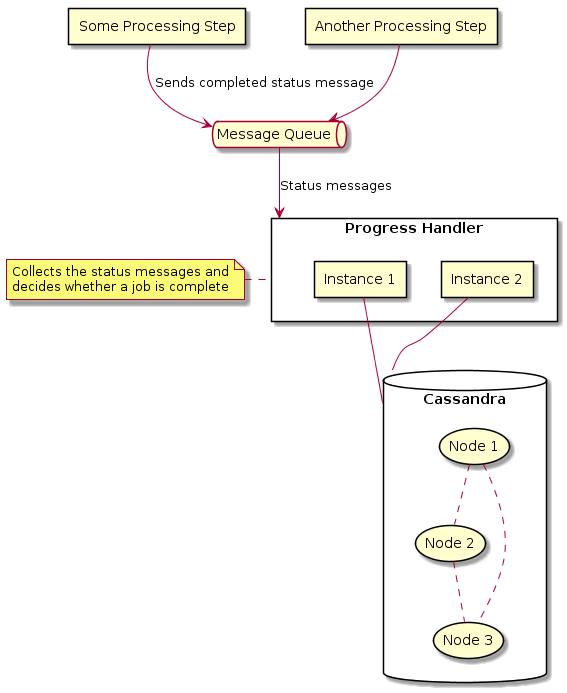 The issue is now that sometimes, the switch from pending to completed cannot be observed from within the progress handler.

First, let's have a closer look on the progress handler. It consists of the following steps:

How do we now find out if the design of the progress handler is sound? One possibility would be to think hard about it. Another possibility is to create a formal specification and then check the soundness through a model checker. This post will outline how one can do exactly that with the help of TLA+. Reasoning about concurrent systems is hard, but very easy to get wrong. With TLA+, we can make use of computers for what they are pretty good at: trying out a lot of different steps, fast, and without errors.

For some more motivation why using TLA+ is a good idea, see Murat Demirbas's blog post "Why you should use modeling".

TLA+ is a formal specification language that can be used to design, model, document, and verify concurrent systems. The theoretical backgrounds of TLA+ are set theory and temporal logic.

This post hopefully gives enough background on TLA+ enough so readers without prior knowledge are able to understand the specification outlined in the post. Following are some additional resources for inclined readers who want to learn a bit more about TLA+:

Additionally, the presented specification will not be written in TLA+ directly but in PlusCal. PlusCal is a pseudocode-like language that translates to TLA+. It is probably a bit easier to read and write for programmers without a strong background in formal logic.

The term TLA+ will be used rather sloppy in this post. When it’s mentioned that “TLA+ does/check/…”, it might well be that it’s actually the model checker (TLC) which does it or that it’s a property of PlusCal.

Modelling the different parts of the system

The queue we want to model is a FIFO. Like every queue, it supports two operations: put for adding an element and take to pop an element from the queue. To keep the specification as simple as possible, we simply begin the model checking with all status messages that we want to have processed already enqueued. That leaves us with only needing to model the take operation.

Hopefully, this doesn’t look too surprising. On the other hand, it’s the first PlusCal code in this post, hence it’s probably worth looking at it a bit closer in detail:

Let’s see if this works! We define our queue queue with two messages, another variable msg where we will store the received messages, add a bit of required boilerplate and then receive the two messages:

print is of course a debug utility and nothing that would have a place in a real specification. If we now translate this PlusCal to TLA+ and execute it, the output will be first message and then second message. How you are actually able to execute this specification is out of scope for this post, but fortunately Leslie Lamport explains it in his video course, in the video "Resources and Tools". The specification can be found on Github, in case you want to toy around with it.

The real progress handler, the one we want to model, is of course more complex. First of all, it not only receives one message, it rather never stops to receive messages. There can also be more than one instance of it. Of course PlusCal also provides a way to model this, in the form of loops and processes.

Note that the loop: is not part of the begin but defines a label. Basically everything in one label happens at once and only between labels the model and its invariants will be checked. Process switches also happen between labels. TLA+ will choose an arbitrary process and execute one step, again and again, indefinitely.

If we now run this model, TLA+ will eventually produce an error: Deadlock reached. That is because TLA+ also checks for deadlocks, and eventually all our processes will wait for a new message to appear in the queue.

Now that we have successfully modelled the queue, let’s move on to Cassandra. Cassandra is used to persist the set of completed processing steps. In Cassandra, it's possible to specify a replication factor that tells Cassandra on how many nodes data should be replicated. If one writes data to only one node, Cassandra will replicate the data in the background to the number of other nodes specified in the replication factor. It means though that it's possible to not always read the latest data, for example in the case data is written to one node and then immediately read from another node and the data is not replicated yet. Cassandra also offers a consistency level for every query, where one can specify on how many nodes data needs to be written before a write query completes as successful (or, in the case of read query, from how many different nodes data needs to be read).

In the blog post's model, the background replication (in other words, the replication factor) is omitted and the consistency level is modelled by taking a set of nodes for the write operation.

Modelling the read could be done in a similar fashion. In this specification, it’s simplified to the following:

What can be seen here is one of the pitfalls of extracting a system’s behaviour into a specification. The modelling of how Cassandra behaves is of course based on the the author’s understanding of how Cassandra behaves. If Cassandra behaves differently for whatever reason (maybe because the author’s understanding was plain wrong, or maybe because Cassandra might have a bug itself), then the specification will not reflect how the real system behaves. In this instance, it’s assumed that when reading a set and different nodes return different sets, Cassandra will merge the sets of all nodes into one resulting set.

Having modelled the queue and Cassandra, there is one final missing part: the progress handler itself. As mentioned before, it executes the following steps:

For consistency reasons, we instruct Cassandra to always read and write from a majority number of nodes before an operation is considered complete. We also consider the possibility that the read and write operations use a different set of nodes. To do so, another helper is introduced to give all subsets of nodes of a given size:

That helper can then be used to describe the variables in the process that describes the process handler:

Once again, TLA+ will check every possible combination of read and write nodes.

The remaining part of the progress handler is pretty straight forward:

As a final step, an invariance called Correctness is added to the specification. TLA+ will check that the invariant holds after every step. One invariant that should hold at every time for the progress handler is that there are either still some messages to process (in other words, the queue is not empty), or that the handler is still in the act of processing a message (number of unacknowledged messages is not zero) or that the progress switch was observed by a handler:

Luckily, if the model is now executed, it still completes without any error.

The fact that the model execution completes without any error creates a dilemma: the switch from pending to completed is always observed, but the starting point of this post was that sometimes the switch isn’t observed. So either the specification doesn’t model one of the involved components such as Cassandra correctly or the implementation of progress handler doesn’t follow the specification. Which of the two possibilities is it?

By adding a bit of logging to the actual implementation and staring sharply at the logs, it can be observed that on the second read, the progress handler doesn’t read back a progress step it has already seen with the first read. That should not be possible if quorum reads and writes are used, hence a first guess would be that no quorums are used in the implementation. The specification can be used to demonstrate that the progress handler requires quorums. If any of the NNodes(Quorum) in the progressHandler process is changed to NNodes(1), executing the model will reveal errors.

The implementation uses Java with the Datastax Cassandra Driver and prepared statements. The statements are created as following:

Having a formal model for the system makes it also possible to check some more properties of it. For example, one might be interested in how many documents are processed, say for accounting purposes. The obvious place to add it is in the progress handler, when the switch from pending to completed was observed. If the switch is observed, increase a counter, done. We verified that the switch is guaranteed to be observed (if the document is processed), hence it should work fine. There is a caveat though: So far we only checked whether the switch was observed - what we didn't verify was that it is guaranteed that the switch is only observed once and not twice or more.

Unfortunately, executing this specification will result in an error. It's not guaranteed that the switch is only observed once, hence using it for increasing a counter for accounting purposes might charge a customer more than once for a single document.

I hope that I was able to demonstrate that TLA+ is a useful tool worth adding to your toolbox. One of its downsides, that it doesn't verify real code, is also one of its upsides: one can verify designs before even writing any code. Give it a try!

Thanks to Florian Mayer for reviewing a draft of this post. All mistakes are, of course, my own.